Being the mindful parents our children deserve

According to the Federal Interagency Forum on Child and Family Statistics, the number of single-parent homes has tripled in the last three decades.  When people think of “single parents,” they automatically picture a single mother, but according to Single Parent Magazine, the number of single fathers has risen to over 2 million in the last decade alone, an increase of more than 60%.  Because of these increasing demographics, study after study has been done on the impact of the absent parent.

Problem is, most of these focus on absent fathers.

What the research has shown is that children with absent fathers are:

What the research does not show, however, is what happens when a parent is absent in the mental sense of the term…

Mindlessness is not just an insulting, pejorative term; it is a state of mind we all have and require.  It is the process of operating on auto-pilot because we have other activities that require more cognitive functioning.  For example, if I am driving my car down the freeway at 65 miles per hour (okay, more likely 75), then I cannot suddenly begin admiring the craftsmanship of my truck’s interior, or if I do, then the next thing I will notice is the guard rail.

Mindfulness is the opposite; it is the state of being fully immersed in the present moment, on purpose, with full intention and without judgment.  It is what happens when everything else suddenly disappears and the object of my focus becomes crystal-clear.

Unfortunately, we live in an era that promotes mindlessness.  We are faced with a rapid, constant barrage of competition for our attention, whether that is in the form of iPods, smart phones, tablets, television, the internet (hey, you’re here, aren’t you?), and so on.  The various media that dominate our attention no longer inhabit a magical three-hour period every evening that we call “Prime Time.”

Today, we have to actually work to get away from the media.

Psychologist B. F. Skinner experimented on rats back in the 1930s and 40s.  He discovered that, if he placed a rat into a box that contained a lever, and when the rat would accidentally bump the lever in its random movement, a pellet of rat food would tumble out of a chute.  The rat eventually learned that it could sit up and push the lever to receive this treat repeatedly, a process Skinner would later call positive reinforcement.

Skinner realized that if he randomized the treats and did NOT give the rats a treat every time they pushed the lever, that it would drive them to push it even more often and with greater anticipation.  He was able to condition the rats to become addicted to the process of pushing a lever, a habit that they learned only a short time earlier.

This same effect is now being used on all of us daily.  Pay attention to how quickly the urge arises to check Facebook whenever your phone lights up or the little red notification number appears.  When you get a text message alert, how quick are you to read it?

Who (or what) is really in control here?

This brings me to my doctoral research.  For my study, I wanted to see what would happen to parents, fathers to be specific, when they intentionally tried to be mindfully present with their children.  First, I met with the participant fathers to interview them and get a baseline of how they saw themselves as parents, as well as their assessment of the current relationships they had with their children.  Each of the participating fathers had a 3-5 year-old child, which was the age I was interested in studying, because at this age, children have just learned that they are individuals, that they have bodies that can do really cool things, and they know how to communicate their wants and desires.  I had these fathers maintain a reflective journal for a period of four weeks.  I instructed them to capture details surrounding moments where they felt fully present and appreciative of the moments they spent with their children.  The process of directed journaling would help them to look for and focus more on moments of this type, which would also help create such moments.

The most profound finding though…

The children noticed this heightened sense of presence, and as they noticed, they invited their fathers into further, deeper interaction.  Such invitations reinforced the fathers’ need to be present by rewarding them with interactions that were later savored.

So, how do we, as parents, father or mother, single or cohabitating, use this information to our families’ advantage?

First, we must absolutely understand that there is a distinct difference between using our butts to keep a chair warm and real, full, intentional, mindful presence.  Once we understand that difference, the next step is to recognize when we are most prone to mindless presence…

Your family can help you with this.  They know you better than you know yourself.

After you recognize when, begin setting aside sacred parent-child time.  In my house, that day is Saturday.  It is a technology-free day and the rules are firm & absolute for everyone: no phone, no computer, no excuses.  Period.  This will help the children see that they still rank #1 in your list of priorities.  Tell them all you want, all day long, but if you aren’t willing to put your money where your mouth is, then it means nothing.

If you need help with forcing yourself to last 24 hours, consider making something crafty and creative with your children:

A tissue-box-monster that will “eat” your phone while you two are together!
(idea credit: handsfreemamma.com; image credit: gigglesgalore.net) 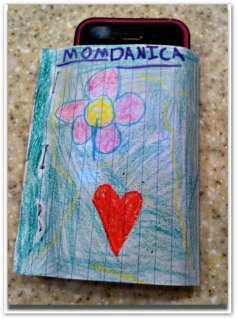 A “no-phone sleeve” – when the phone is in the sleeve, you are not allowed to touch it!
(idea & image credit: bepresentproject.com)

If a whole day each week is too much to miss all at once or if you want something more regular, set a timer at a specific time each day, such as bedtime.  Make your children your sole focus at that time

When your sacred time is over, don’t rush back into the same old thing.  Think about it.  If you fast for 2 days, you don’t dive into a large pepperoni pizza.  You’d get sick and feel horrible for your lack of self-control.  Instead:

Remember that you alone control your entrance and exit from the world of media and communication technology.  Do not let the distractions convince you otherwise.

2 thoughts on “Being the mindful parents our children deserve”