The Bus Ride & That Smile

At the risk of submitting student grades for the week late for one of the universities generous enough to continue to employ my services, I closed up the ol’ Macbook today in favor of taking my six year-old son and his cousin to a special event.

For the first time in many years, our community brought back the excitement of hydroplane racing.  If you haven’t seen these machines race before, it is truly something to behold, as these drivers harness themselves into a fiberglass and carbon fiber contraption with a turbojet engine strapped to it, searing ahead at speeds of well over 200 miles per hour.  The sound of them alone is well worth the trip. 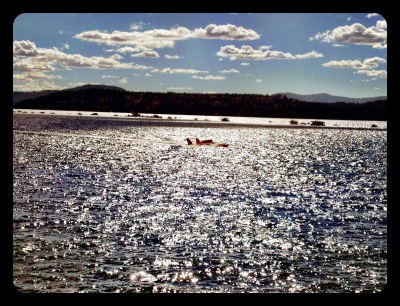 Heading home from campus, I received a text message from my wife, asking how much longer I would be, since my son was, in her words, “going crazy” with anticipation.  Not wanting to miss the spectacle, I hurried home.  When I arrived home to pick him up and head to the lake, I was met with a more-energetic-than-usual embrace as I got out of my truck.  My wife’s text wasn’t just true.  It was an understatement.

So, we left and headed out to the event, but we couldn’t just head to the lake and park there.  Seeing as how an estimated 50,000 people were expected to show up the following day for the big event (we were just going to watch them run qualifiers), we had to head to our local fairgrounds, park there, and take a “shuttle” to the lake shore.  The shuttles turned out to be school buses.

This excited my little man all that much more.

Last school year—his kindergarten year—was spent riding a bus to school, but being picked up by either myself or my wife.  This year, for first grade, he gets to ride the bus to and from school, which is, to him, a very exciting prospect.  Add to this sense of anticipation, knowing that school starts next week, the thought of being able to show his father why he loves the bus so much, and voila!  His little heart absolutely soared.

As we boarded the school bus (which I haven’t ridden in many, many years), his beaming smile urged me to listen and to savor this moment.  He guided us to a seat, where the window was already open, and he began explaining all of his favorite parts of riding the bus, as well as humorous anecdotes stored up like baggage from the last year, just waiting to find a recipient upon which to unload.

We laughed and I listened.  Suddenly, I found myself smiling uncontrollably.  My face grew warm with vicarious delight as I marveled at his sense of wonder.  We bumped along the rough roads and leaned into the turns as the old yellow bus groaned at its own weight placed on the shocks. 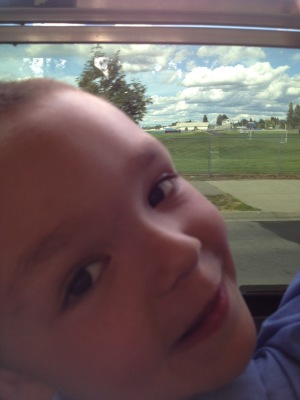 When we arrived at our destination to watch the race, there was something different about my son.  Sure, the whine of the jet-boats and the spray of the rooster tails behind them was a sight to behold, but all of it took a backseat to the closeness I felt while he leaned against me.  We sat on the grass to watch, only about 30 feet from the water, perched on a basalt scree hillside, but instead of being enthralled with the spectacle of speed, my son seemed more interested in bonding with me.

Four qualifying runs after it started, the announcer notified the crowd, much to their dismay, that they were calling a black flag on the event due to excessive wind and waves, and hopefully, they would be able to resume after things calmed down.  My son asked if we could leave, and I had no problem obliging his request.

Why?  Because I felt happy.  I felt fulfillment.  What else did I need?

We hiked our way back to the so-called big yellow “shuttles,” which were waiting to bus the throngs of spectators back to their remote parking lots.  Once again, the wheels on the bus went ’round and ’round, but I noticed something that I will never forget.

This time, my son, gently placed his hand on my leg, resting it there ever so softly.  I noticed, so I placed my hand on his and glanced over at him, admiring the way he stared out the window through eyes filled with wonder.  As my fingers met his, he smiled.

But, this wasn’t just any smile.  No, it wasn’t some huge, “wow, I just got an iPad for Christmas” type of smiles.  It wasn’t even a “that was a pretty funny, though stupid, knock-knock joke” type of smiles.

The corners of his mouth turned upwards ever so slightly that it was one of those smiles that gives away to others that something just happened that warmed the innermost soul and carved a memory in the granite tablets tucked away in the recesses of the mind.

He caught me stealing a glance at that moment, and the smile grew, but only just.  Returning the gesture with one of my own, I asked, “Why are you smiling?”

This is what it’s all about.

This is life, this is joy, this is love, and this is what makes my world go ’round.

I am exceedingly grateful that I was not just there to witness it, but that I was fully there, to feel it, experience it, and be that active part of it that I needed to be.

The only thing I’m taking away from today was the bus ride and that smile. 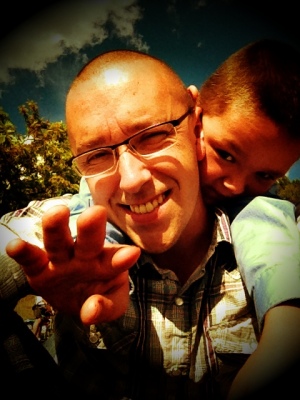