A Lesson in the Importance of Failure

I’m sure I could go on from here to recite the virtues of one famous sage after another, all of whom tried to convince people like you and I that failure is something not to be afraid of because it is inevitable, but let’s face it.

Failure sucks.
How many of us truly embrace it as in any one of these inspirational quotes?  One thing is for certain though: these quotes have the tendency to inspire.  If we know we are not going to take this advice to heart, then why do we recognize them as being so profound?

If there’s one thing I’ve learned through bitter experience, it is that failure is something to be acknowledged, rather than ignored, appreciated, rather than discarded, and above all, cherished, embraced, and welcomed, rather than feared and despised.

I’m going to tell a few stories here, because let’s face it – I’m a storyteller and it’s what I do for a living.  However, these stories are about how I arrived at this conclusion and following them, I make an attempt to offer you my own personal advice on what it takes to arrive at this place, but let’s begin . . .

Part 1: Failure to Provide
When you look at the following picture, think about what you see for a moment: 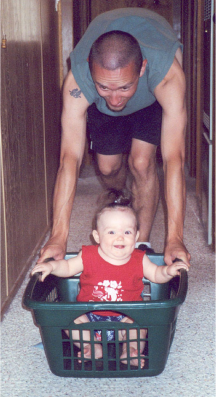 What you don’t see is the context around the picture.  Unfortunately, this picture only freezes a single moment in time visually, ignoring all of the sounds, smells, and feelings of the moments before, during, and after that which has been frozen.

In this picture, I was compensating for what a failure I was at the time.  This was shortly after I had begun college.  At that time, I had willingly given up a $50,000 per year job to attend school full-time so that I could pursue my dream career in physics research.  After my first semester, I dropped that ideal because I was burned out after having worked in engineering for nearly a decade.  I was lost.  I was wandering aimlessly without a clue as to what I wanted to do.

My family was suffering on several fronts.
My wife and children were frustrated because I was never around and even when I was, I wasn’t.  I was working anywhere from three to five part-time jobs so that I could earn money around my school schedule.  These jobs included tasks like pizza delivery, warehouse stocking, cleaning dog kennels at the local Humane Society, and cleaning toilets.  Despite my efforts, we were still a family of five people living off of less than $10K a year, but that’s not the worst of it.

To make matters worse, I was slapped in the face with a fraudulent child support claim for my two older children that allowed the state to cut my income down to a mere $300 a month, and I could not afford the legal fees that it would take to fight it.

So there we were, a family of five, living in a single-wide trailer with little to no food, barely any heat, and the threat of homelessness lurking around each corner.  The moment I felt like a failure was when I had to look into my little girl’s eyes—the one in this picture—and tell her that it was okay for her to have my dinner because she was still hungry, even though it was the first food I had a chance to eat in 48 hours.

After dinner, to get my mind off of things, I spontaneously put my baby girl in a laundry basket and raced her up and down the narrow hallway of our tiny little trailer.

For that moment frozen in time, I did not feel like a failure.
I was somebody’s hero.
I was ten feet tall.
I could conquer the world.
She believed in me even when I did not.
Part 2: Failure to be Present
Now, take a look at this next picture and think about what you see…

Fast forward through several years and three hard-earned college degrees to a time when money wasn’t an issue.  At the time this moment was frozen on film, I was working as an executive.  Money was great and we were more than comfortable in that regard, but I was working around 60-70 hours per week to do so.  I still hadn’t yet found a way to compromise between time, financial support, and family.  This picture shows what I felt was one of my greatest failures, so allow me to tell you another tale . . .

While I was at work on New Year’s Eve, at a meeting, I received a phone call from my panic-stricken wife.  She told me to get home now.  I instinctively knew what that specific tone meant and didn’t ask questions.  I told my boss I had to go and sped home, doing about 100 mph the whole way.  I met up with my wife at an Urgent Care, where I found her and my 6 month-old son, Parker, both crying loudly in the parking lot.  When I got out of the car, I could see that something was severely wrong.

While my wife was trying to dress herself up nice for our night at home together, celebrating the New Year, it seems that my son scooted down the hallway in his walker, into the bathroom, and grabbed the cord to a hot curling iron.  It landed on his shoulder, causing him to flinch, only making things worse.  By the time my wife made it to the bathroom, the iron had fallen from his neck to his forearm, where it was searing his flesh.  This all took place in the period of about 6 seconds.

6 seconds!
We spent the next three months changing dressings on his second and third-degree burns, the very dressings you see in this picture, two to three times a day in a ritual that often invoked the same blood-curdling scream we heard the day it happened.  The pain was extreme for him, but for us, those screams hurt differently.

Today, he barely has any scars on his neck, but the scar on his arm is very prominent.  He now makes up stories to tell people about how the scars got there.  For the longest time, it was because of a knife fight he got into with pirates, trying to protect Mommy and me, while the most recent story is that he was riding a rainbow-colored, long-necked dinosaur, sword-fighting with skeletons.

Regardless of the outcome, this moment made me wish I had been home more and working less.  I felt like this incident was reflective of my failure as a husband and father, not being home when I was needed the most.

What I learned from this incident is that, every time I have faced overwhelming failure, I have somehow adapted to that challenge by being intentionally—mindfully—present.

Part 3: Failure to Appreciate
Let’s look at the last of my stories now.  What do you see in this picture? 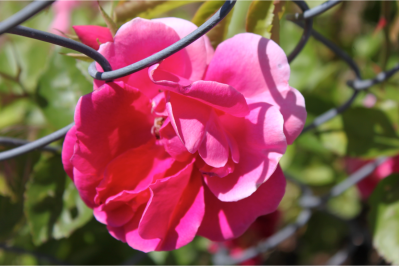 Yes, it’s a rose, and a rather fragrant one, at that.  If you were in my front yard, you could easily smell this rose from about five to seven feet away!  This particular rose bush is located in the northwest corner of my front yard, where it has resided and bloomed since well before we moved into our home.
The thing is, we never wanted it.
My wife and I have never been big fans of roses.  If it was a jasmine shrub or a cluster of tiger lilies, we would have been thrilled, but we decided to rid ourselves of all the rose bushes as soon as our moving truck pulled into the driveway.  For the next four years, I did everything I could to get rid of it, but the stubborn root ball had other plans.  Unless I felt like digging out part of the city street, I wasn’t getting to it.  So, I decided to use chemical means.  I doused the thing with Roundup, and weeks later, it appeared dead.  I was victorious, or so I thought.  The next year, its leaves miraculously grew back and the bloom you see in this photo appeared through the chain link.  It was then that we both decided it didn’t want to die.  It is now known in our neighborhood as the demon zombie rose bush from beyond the grave.
But it still smells really good.
My “failure” to kill the rose bush demonstrated to me the power of tenacity and appreciation, as well as a lesson in adaptation, which was a theme throughout each of the previous stories as well!

As I noticed the dramatic contrast between my perspectives on poverty to my daughter’s, I realized that time is important, no matter what, and that finances are only a set of socially constructed numbers that have no intrinsic value or bearing on my self-worth.  I am not my salary and neither is my family.  Together, we are considerably more than the sum of our parts and nothing should ever be allowed to take that place!

As we nurtured our infant son back to health, I saw a strength I had never seen before in my life.  I saw the bright lights of unconditional love in his eyes staring up at me every night before bed, as he would fall asleep to my butchered renditions of the song, “Pure Imagination,” from Willy Wonka & the Chocolate Factory.  He invoked more compassion and emotion from me during that time than in any of my previous years combined.

The most important lesson tied to each of these stories is that none of these situations were failures unless I named them as such, and at that point, my only real failure was to be truly present to possibility.

Why are these lessons in how to re-frame our perceptions of failure so important?

Too many fathers abandon their families either literally or emotionally, by drowning themselves in their careers or hobbies because of a fear of failure.

It could be that a man had a horrible father growing up and now lives in fear of repeating those same mistakes.

It could be that a father is terrified of saying the wrong thing, setting the wrong example, or just by his mere presence, potentially screwing up an otherwise innocent child for life.

Fatherhood is not a threat to be feared.
It is a curiosity to be explored.

It involves many, many mistakes, but these mistakes provide critically important lessons for both father and child.

Approach your relationship with your child with the same reckless abandon that you used to do as a child.  Let go of the fear and re-frame it as an adventure, but this time, it isn’t you, by yourself.

This time around, you’ve got the best company a man could ask for.

3 thoughts on “A Lesson in the Importance of Failure”